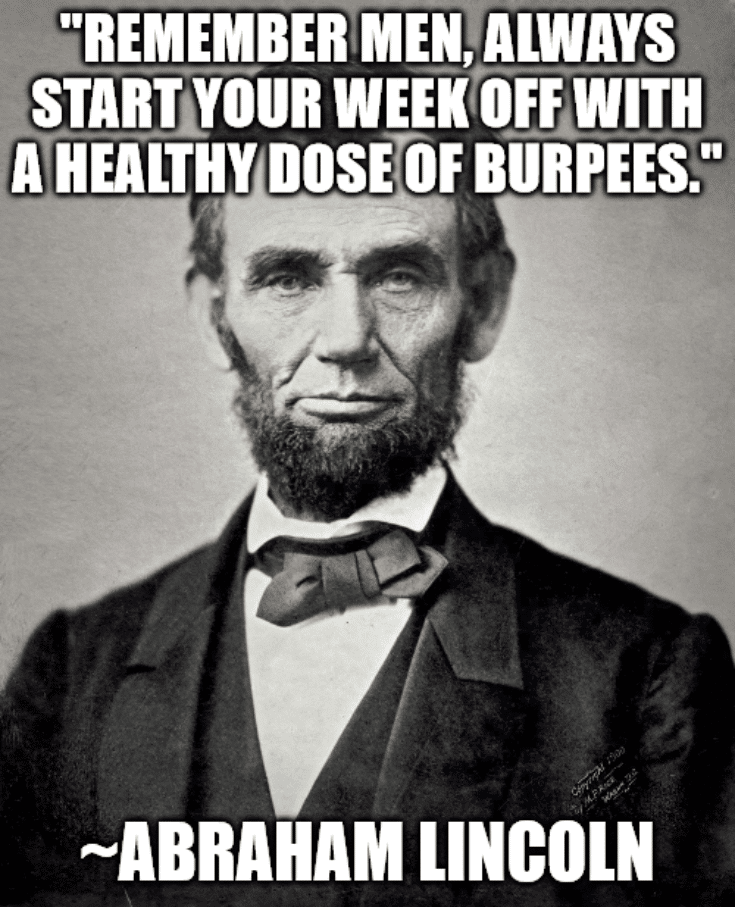 With an impromptu road trip from DFW to NWA, YHC had a lot of time to ponder the perfect beatdown. But didn’t. Burpees it is.

PAX counted off: 7. Odds mosey clockwise around the circle drive, evens mosey counter-clockwise. Or was it the other way around? 🤔 YHC can’t recall, but it doesn’t really matter. 7, being a prime number, had already ruined the plans. Too much mental gymnastics for the gloom. For every lamppost, 5 burpees or 5 merkins, alternating until we met in a well-formed gaggle on the other side of the circle drive. Does that sound confusing? It wasn’t. About 10 lampposts, so 25 burpees and 25 merkins for those keeping count.

The PAX looked utterly confused (as usual) when asked to Bernie Sanders. Probably because there were no hills. So we ran backwards. Then forwards. Then backwards. Some forwards. Some more backwards. We did this a few times with some Al Gores and panting along the way. When the PAX looked chilly, we executed flawless warm-up burpees to keep that core nice and cozy. YHC can’t recall exactly, but it was probably 10-15 burpees. Atlas is fast.

With plenty of time remaining, YHC picked a van to indicate one end and a random parking area as the other end for some Jacob’s Ladder. However, after consulting the Exicon, that wasn’t a Jacob’s Ladder. It has a name, but YHC can’t recall and will do 10 penalty burpees because why not? We counted up to 7 for one exercise and down from 7 for the other exercise while running between: WWIs at the van, burpees at the other. Should come out to 28 burpees + 28 WWIs with some running between sets.

The PAX looked refreshed and ready for more, but alas, time was running out. Mosey to the start with 5 alternating burpees or merkins at each lamppost: 25 burpees and 25 merkins.

With great disappointment, the PAX finished the last set of merkins right at 0615 with no time remaining for Mary. YHC will need to reconsider the merkins next time as they interfered with time for more burpees. Silver Bullet was particularly disappointed, expressing his dissatisfaction vocally. YHC has noted this for future beatdowns.

In all, about 2.5 miles, 100 burpees, and 50 merkins to kick off this beautiful day in NorthWest Arkansas. YHC is grateful for the PAX and the F3 brotherhood for the hospitality, support, and encouragement to get me out of the hotel fartsack this morning. After a day of travel disruption and frustration, it was exactly what I needed to get myself back in check.

Announcements:
GrowRuck in May! Sign up. If you haven’t, you’re wrong.
Check Slack for others. YHC knows there was more but can’t recall.

COT/WOW:
* Support and prayer for Casket’s daughter as she completes/presents a major college project soon.
* TCLAPS for the HIMs that stepped up to help Dutch Oven and his family.
* YHC shared on the emptiness and loneliness facing many men as they face sadclown. Who needs to hear from you? Where can you be present? Who can you encourage to speak up? Do you have a shield lock?
* Silver Bullet closed us out in prayer.

Atlas is fast. Silver Bullet is a huge fan of burpees.

F3 NWA continues to amaze me in all three F’s. Thank you for getting me out of bed this morning. It was an honor to work alongside these men on this morning.